I had an opportunity to see “Swan Lake” at the Bolshoi when I was a child; my school offered students who were interested in seeing the ballet a day trip to Moscow. The outing was entirely voluntary, and the children who did not wish to go would get a day off school instead.
Guess which option my stupid nine-year-old self went with.

A time would come, some eighteen years later, when I would bitterly regret my decision.
My family moved overseas soon after, and our travels took us further and further away from Theatre Square, eventually landing us fourteen thousand kilometres away, in Australia.

In 2013, I was not far enough along my ballet “journey” to know about QPAC‘s International Series and had missed the Bolshoi’s first visit to Australia in over two decades. But when QPAC managed to secure the Bolshoi international tour again in 2019, I was ready. 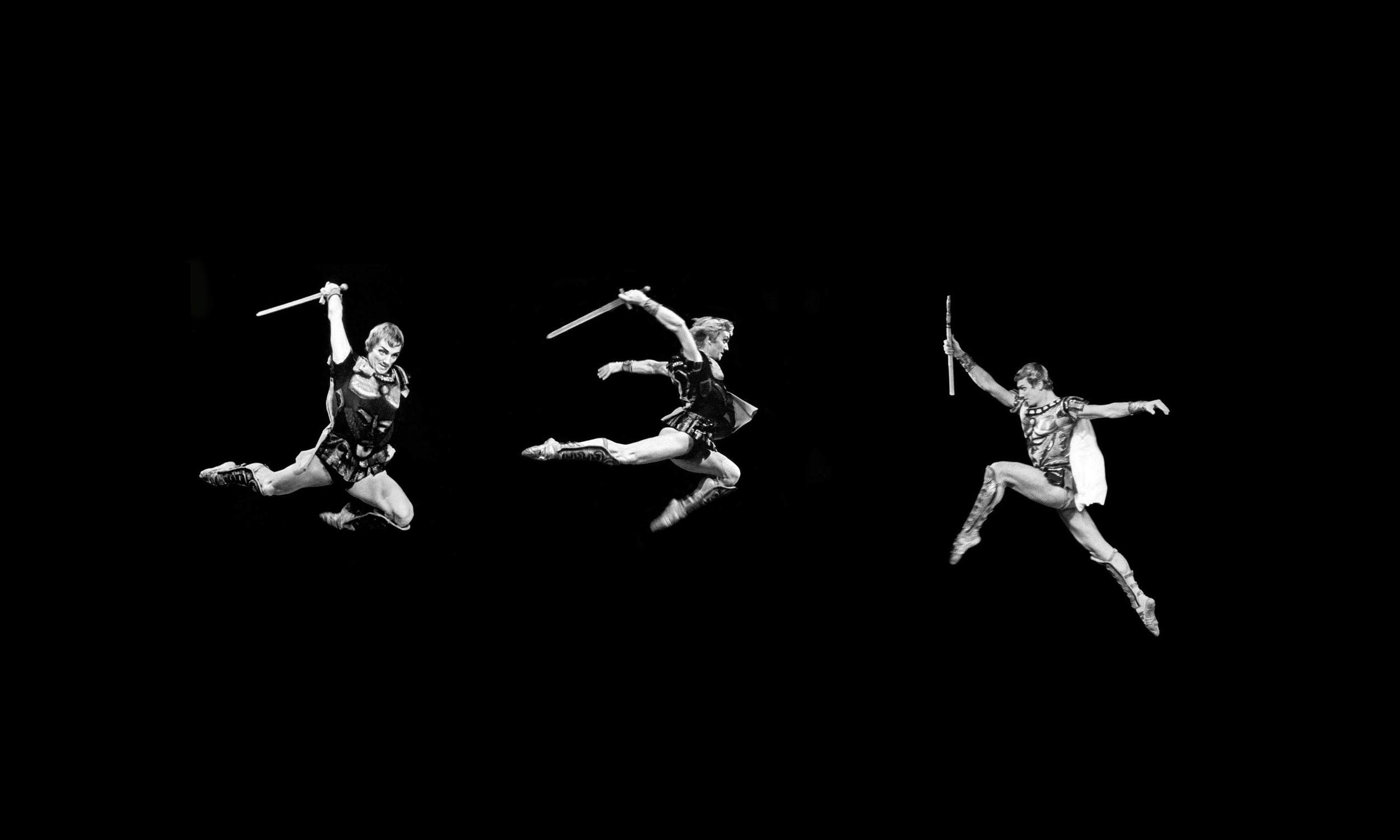 Before I begin recounting my experience, I should acknowledge an important detail: the QPAC stage places the Bolshoi dancers at a disadvantage. Not only is it significantly smaller than their stomping ground – the stage “Spartacus” was created for – but it isn’t raked either.

The opening night cast did not get a run-through, though a general rehearsal had taken place the night before. Consequently, the dancers who performed on the 26th did so with little prior experience of the space. Throw jet lag into the mix, and you have a serious challenge on your hands – one that the Bolshoi, true to form, rose up to, delivering a powerful performance.

The corps de ballet, in particular, should be commended. Unlike in many other ballets, the “Spartacus” corps doesn’t just provide a frame for the story, they drive the narrative and command the atmosphere on the stage, and they handled the challenges thrown at them remarkably well.

Some critics later argued that the smaller stage “intensified the explosive performance“, though I personally felt that dancers were restricted by the space.

Rodkin somewhat confirmed this when we spoke later that night (he was very aware of the tight space between the screen and the orchestra pit while dancing), though this was an offhand comment rather than a grumble (Rodkin doesn’t strike me as a person who ever grumbles).

Despite its subject matter, “Spartacus” is an inherently Russian production. Khachaturyan began working on the score during the Second World War, so the ballet has always carried a personal significance for the Russians. Roman symbology – later adopted by the Nazis – such as the Roman salute and the Reichsadler (Imperial Eagle) feature heavily in the production, while some of the sets have a certain Third Reichesque feel to them. At the heart of the story is “antiquity’s greatest man”, as Karl Marx had put it, fighting against an evil oppressor. Given the context, it is hard to imagine a more patriotic production.

Anyone remotely familiar with Russian ballet would be aware of Yuri Grigorovich’s status as a living genius. In a world where the word has worn thin with use, he is a man who stands alone. And with good reason. Grigorovich’s ballets have endured for nearly a lifetime, and “Spartacus” has remained the Bolshoi’s flagship production since its premiere in 1968.

Looking back on the ballets I have seen in the past, both live productions and recordings, I can often pick out one element – be it the music, the costumes, the set design, the choreography, or the acting – that was particularly memorable and stood out on its own. I can’t manage the same with “Spartacus”, no matter how hard I try. I can’t even separate Khachaturyan’s music from the production; all the elements are fused together.

Even the little things – the chains, the weapons, the banners – are not mere props; Grigorovich weaves them into the choreographic language – demonstrating attention to detail often lacking from modern productions.

Grigorovich’s “Spartacus” is all-encompassing. It takes all the elements and binds them into a brilliant, adamantine whole.

Another truth that quickly becomes evident is that Grigorovich is not only a genius choreographer but also a brilliant director. In “Spartacus”, he delivers an engaging blockbuster, punctuated with some of ballet’s most complex partnering and daring lifts. The production is quite long, consisting of twelve scenes across the three acts – adding up to around three hours as a whole – but it never drags. In fact, each act flies by remarkably quickly. This is something I have very rarely experienced with ballet and theatrical productions. Grigorovich’s sense of pacing is impeccable, as is his timing. 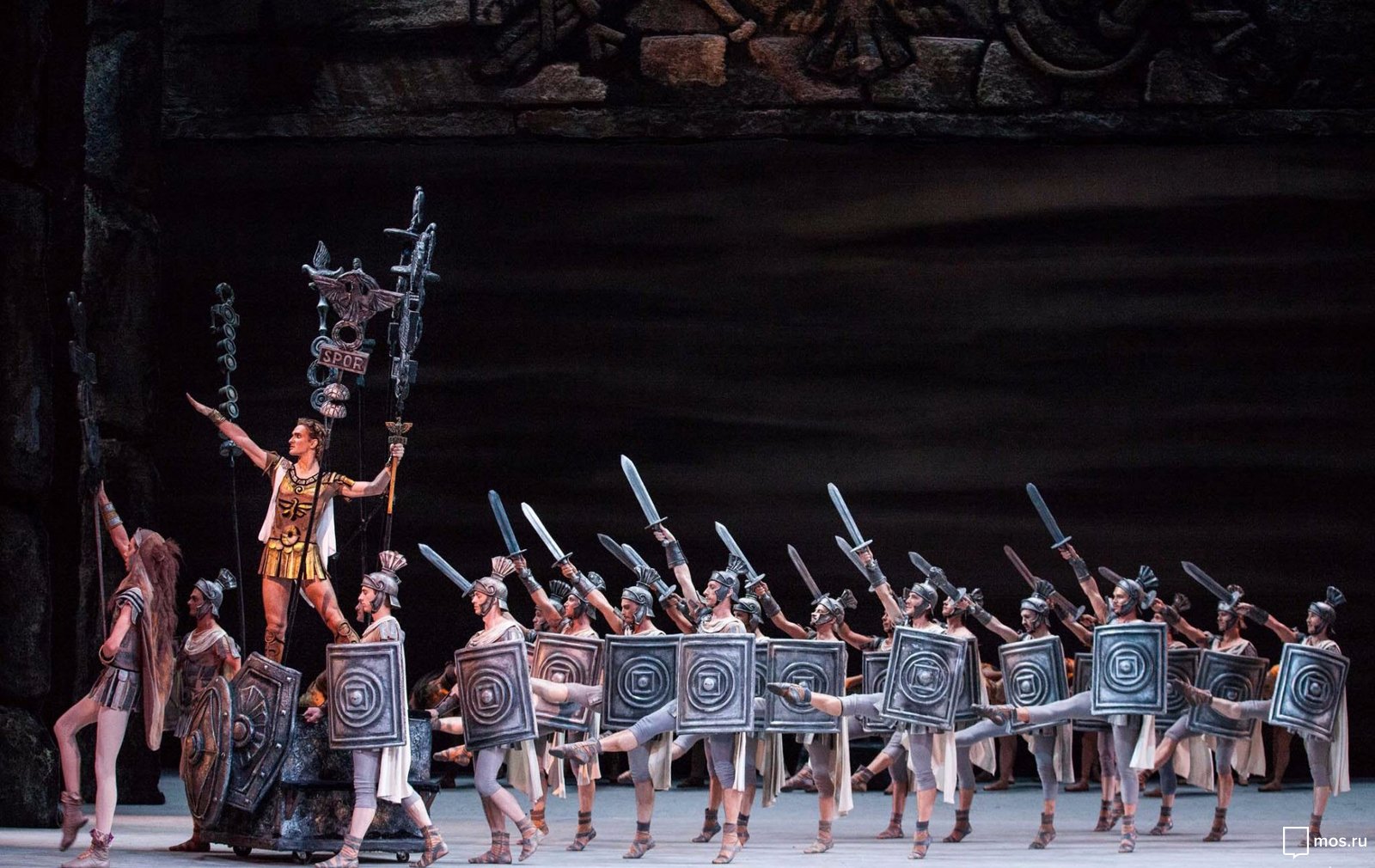 The Bolshoi’s classical productions, painstakingly preserved over generations, offer a glimpse into a different era, one that belonged to great artists like Simon Virsaladze.

The original set design for “Spartacus” was much more vivid, reflecting the depth and richness of Khachaturyan’s score. Grigorovich suggested that the colours should instead be muted to create a contrast with the music. Virsaladze’s solution presented earthy tones and stone motifs – Ancient Rome rebuilt – with the characters looking like statues come to life.

Nothing is left to chance in Virsaladze’s vision. The gladiators’ costumes are a particular shade of grey, with spots of red layered over the top. With the right lighting, the dancers’ movements create a striking, dynamic effect. Crassus’s court glitters with gold and precious stones – an effect Virsaladze achieves with the simplest materials and an understanding of light and movement.

Deciding which cast to see was no easy task. Ironically, for a ballet that focuses mainly on the men, my decision rode almost entirely on which ballerinas were performing on the night. Krysanova, Smirnova, Vinogradova, Nikulina, Sevenard – the latter is a corps de ballet dancer I am personally invested in, and who will debut as Phrygia on the 6th of July – you can imagine my agony. Ultimately, it was Vinogradova who swayed me to purchase a ticket to the opening night performance. 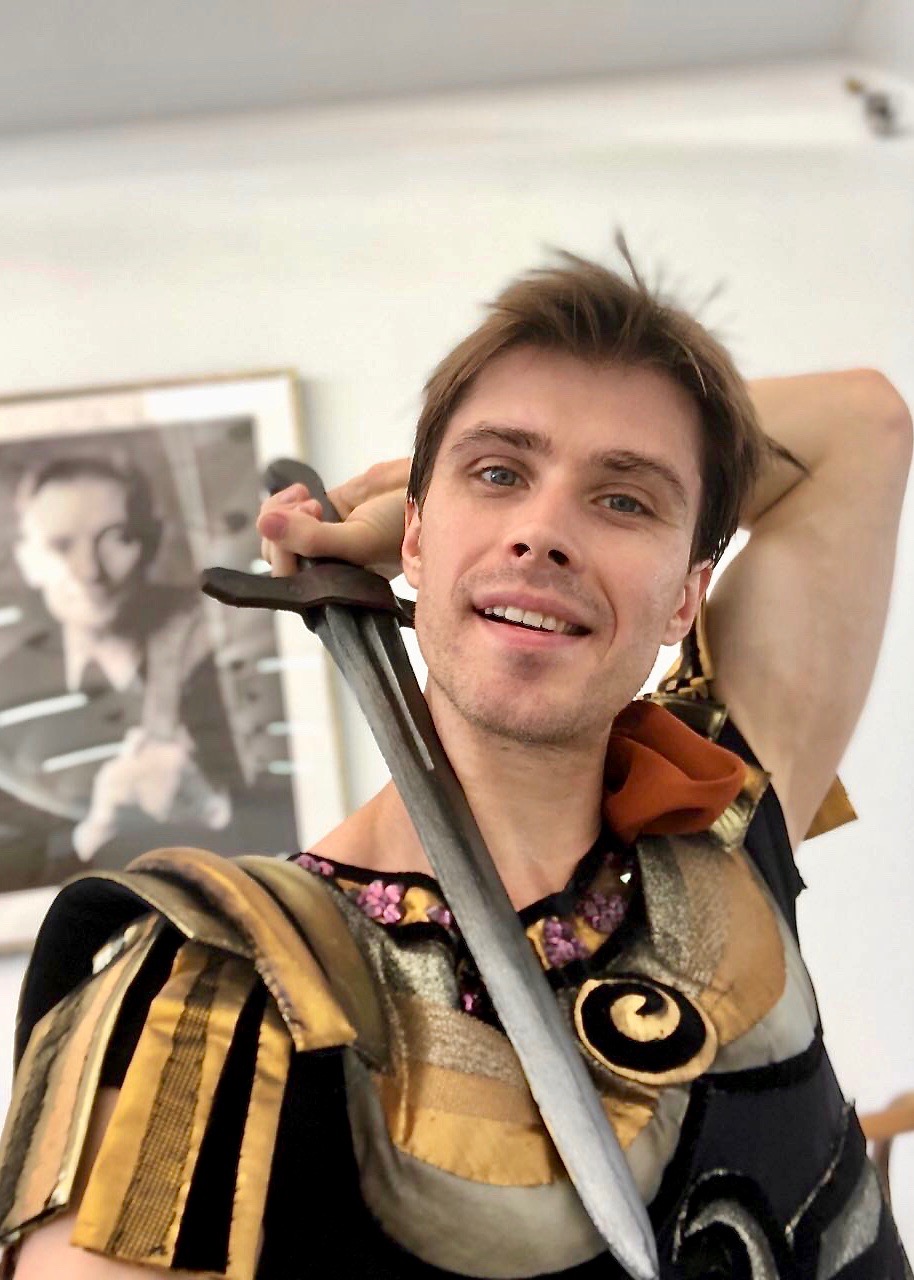 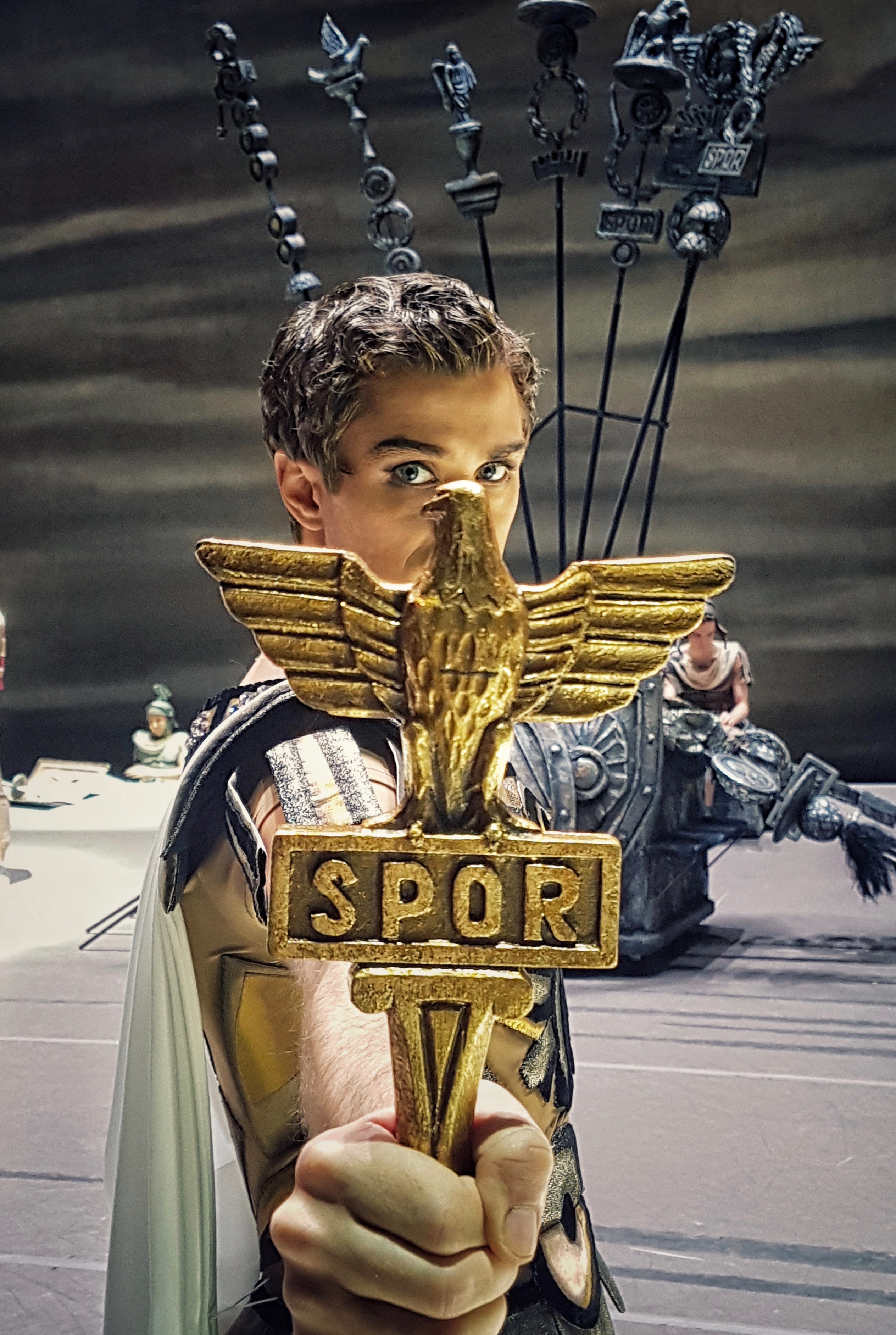 Those of you, who have been following me for some time, may know that I have a certain prejudice towards Artem Ovcharenko; one that has kept him off my radar for several years. As a result of this, Ovcharenko was the dancer I was least familiar with going in, and the one I had the least expectations for. In the best twist of fate the universe has delivered upon me in recent years, Artem ended up blowing me away. I thoroughly enjoyed every second he was on stage and couldn’t tear my eyes from him, even when he was sharing the stage with Rodkin, my long-time favourite. I left the theatre feeling like I have just been taught a very valuable lesson.

The surprises did not end there, however. I had unwittingly witnessed Ovcharenko’s debut as Crassus that night – something that I, in my ignorance, did not realise until the following day. My surprise was palpable. Ovcharenko wore Crassus’s skin with utter gusto; He was animalistic, flamboyant, unhinged, and alive. He was practically vibrating with vitality, ricocheting out of control in some instances. He delivered Crassus with the confidence of a dancer who knows the part well, has thoroughly sunk his teeth into it, and is now enjoying the ride.

A view from the wings: video of Ovcharenko as Crassus 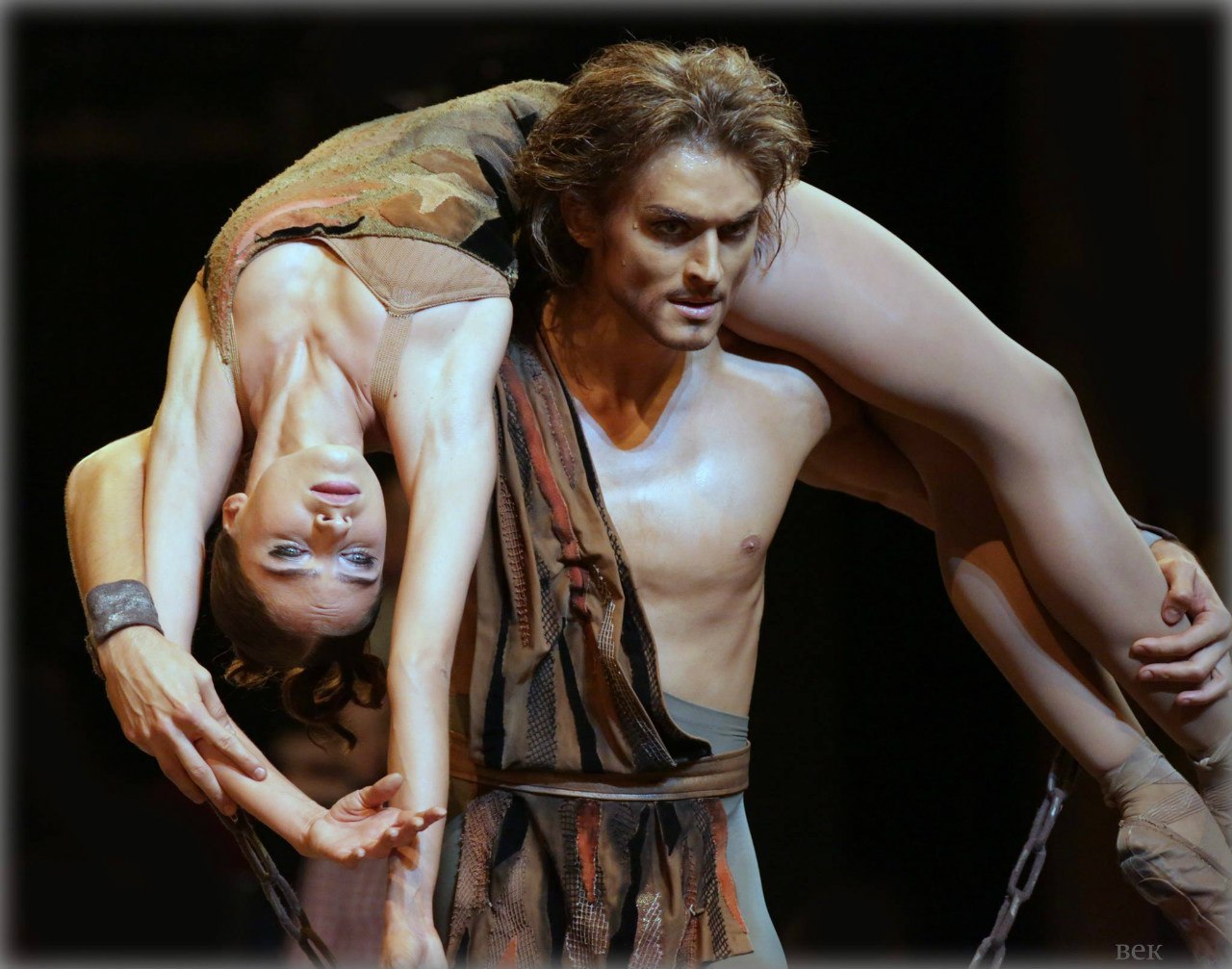 I don’t envy Rodkin. Vladimir Vasiliev had created something unique and definitive – a Spartacus all others are measured by and, fifty-one years on, he remains unsurpassed.

I wonder what a danseur feels when he starts to prepare for the part, knowing that he will inevitably be compared to a colossus of the ballet world. I imagine that a smart man would know that Vasiliev is untouchable and would instead focus on telling the story in his own voice.

When talking about Spartacus’s defining features, Vasiliev points out the man’s gentle heart, generous spirit, bravery and love for his fellow men.

Spartacus’s vulnerability, his grief and his outrage at being enslaved are as crucial to his character as his prowess in battle.

Rodkin manages this balancing act well. His Spartacus is stoic, even restrained – a charismatic and dignified leader, whose personal tragedy simmers under the surface. This presents a stark contrast to Ovcharenko’s unhinged Crassus, which makes the two men fascinating to behold.

Where Vasiliev’s intensity burned bright from the start, Rodkin’s built up gradually over the course of the ballet, reaching a crescendo in Act III, just as Spartacus is crucified on the Roman spears. I don’t know whether this was intentional, but the effect is powerful – you get the sense that Spartacus was cut down in his prime and his death comes almost as a surprise.

The scene itself is stunning. There was a moment of unreality when the audience erupted in applause, clearly stunned by the beauty and power of it, cheering as the main character – the good guy – drew his last breath.

A view from the wings: video of Ovcharenko and Rodkin as Crassus and Spartacus. 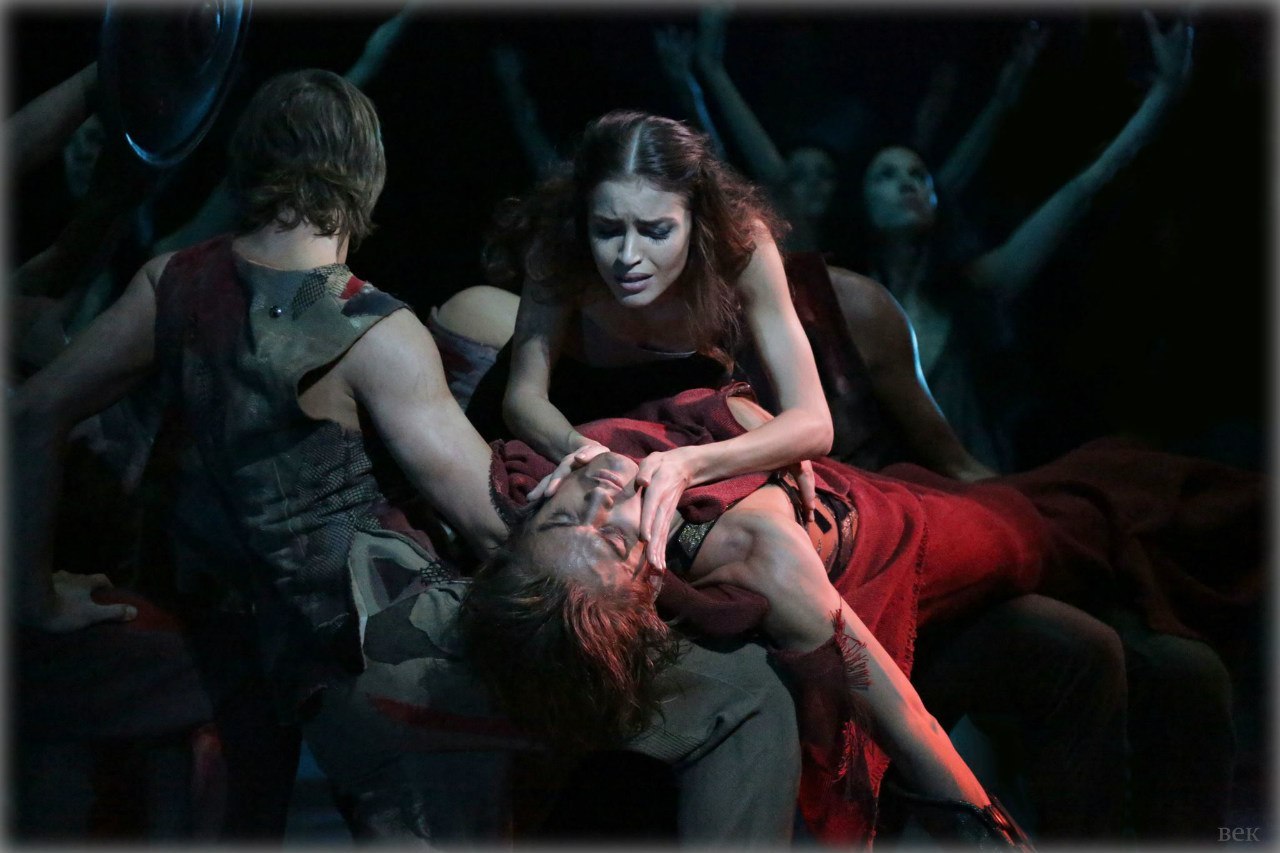 As I mentioned earlier, my decision on which performance to buy a ticket to ultimately hinged on whether or not Vinogradova was part of the cast. With so many renowned principal dancers representing the Bolshoi on this tour, what makes this leading soloist so unique? Let us say I had a gut feeling about her.

What I have seen of Vinogradova in the past indicated that she has truly made the role of Phrygia her own, and her acting skills – a marked characteristic of the Bolshoi Ballet Academy graduates – were particularly impressive. Throughout the performance, I often regretted sitting too far away from the stage to see the dancers’ faces, their expressions, but with Vinogradova, there was no need; Her entire body sang.

I had expected Phrigiya’s mourning scene in Act III to move me to tears, but Vinogradova got to me a lot sooner than that: Phrygiya’s Monologue, Scene Two, Act I.

If you want to understand what Russian ballet is, then go see Maria Vinogradova dance Phrygia.

Cruel, ambitious and seductive, Aegina poses a stark juxtaposition to the gentle Phrygia, though the two hardly share the stage. What is especially appealing about this woman, in the modern context, is that she holds her own against the men. Krysanova’s Aegina is brave, ruthless and fun. She pursues her goal with a fierce single-mindedness, and there is something incredibly satisfying about her eventual triumph, even though it comes at a cost.

I felt that Krysanova, much like Rodkin, amped her character’s intensity up over the course of the ballet, progressively becoming more eloquent and expressive. By the time we get to Scene Eleven – the traitors’ camp – Aegina storms the stage with triumphant abandon.

Krysanova and Ovcharenko make a great match as Aegina and Crassus. The partnering is organic and passionate, and the pair leave you wanting more; I couldn’t help but wish for their story to continue. As far as spinoffs go, this one has got real potential.

“Spartacus’s” greatest gift to the audience is that it does what good theatre is supposed to do but rarely accomplishes: it takes you out of time, out of yourself, transports you someplace else and makes you forget that you’re sitting in an auditorium of a theatre. It creates a fantasy and holds the audience spell-bound despite its hefty run-time.

It is the first production that made me lament that I did not pursue ballet when I was young; what a life it must be to create such magic on stage! It’s ballets like this one that inspire children to become dancers, and it is, therefore, unfortunate that at its native theatre “Spartacus” has a 12+ age restriction.